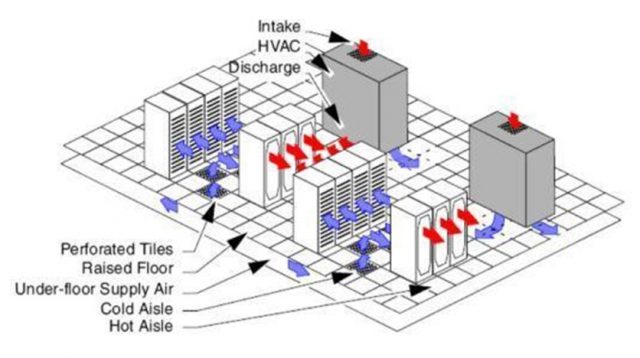 As the US Society of Mechanical Engineering, ASHRAE operates under a separate unit (ASHRAE TC 9.9) in Data Centers. This unit sets out the environmental standards that guarantee the expected business continuity by working with IT device manufacturers as well as companies that research, supply, and produce cooling systems used in data centers.

As known, standard servers, storage and network devices located in the white spaces of data centers are active hardware and have power consumption. In practice, these devices convert all the supplied power into heat energy in the white space volume. The ability of devices to meet their performance with high business continuity depends first on their hardware thermal stability and then the thermal stability of their room accommodated.

The hardware heat stability of standard IT devices is achieved as the heat created by components such as processors or power sources inside is discharged as warm air by the conditioned air they absorb from the front. The thermal stability in the room is achieved as the critical cooling system collects the accumulated heat and releases it to the atmosphere.

The table above shows the standard requirements announced in 2011 that are still valid as temperature criteria. The table includes a total of 6 classes in total including 4 class A. The table is divided in two criteria sets, “recommended” and  “allowable” for Class A. 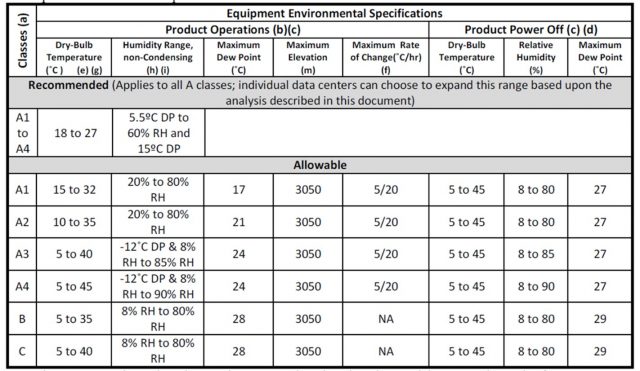 For Class A, the second category of “allowable” is defined separately for each class. If a short-term performance lack occurs in the cooling systems or if a cooling efficiency boost system is planned to be used for a certain period, the “allowable” range is used.

Parameters corresponding to the “server’s expected life” are planned to be monitored among the standard server management features in the near future. The servers become outdated due to their technological poverty in time rather than their hardware wear off. It is almost 3 to 6 years. In this standard, ASHRAE highlights the idea to optimize the environmental conditions with expected server life, so the energy efficiency systems are allowed to reduce the consumption. (This topic will be further discussed in other blog posts.) 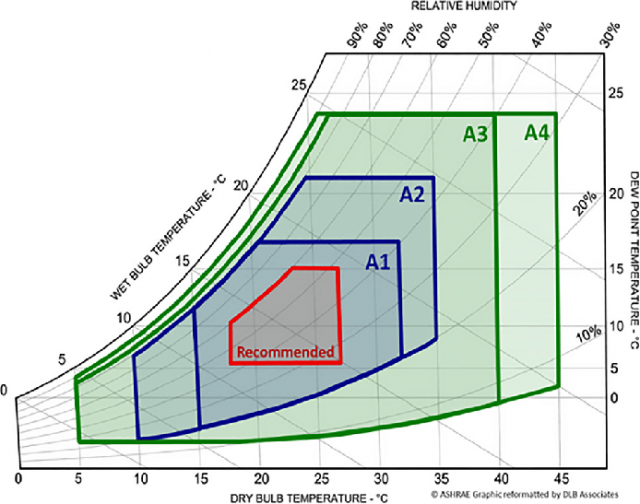 In the allowable range, the temperature range can be moved to 15°C – 32 °C and the relative humidity range between 20% – 80%. The critical point here is considering the specific safe operation range of each IT device. If the “allowable” range is not supported by one or several IT devices, operating in this wide range will be inconvenient. If IT devices with narrow range should be in the same white space, the temperature and humidity limits should be set accordingly.

Electrical devices are damaged by the static electricity generated due to the friction of high airflow in low amounts of humidity. On the other hand, high humidity values pose the risk of air particles sticking to electronic cards and resulting in electrical pathways over time.

The table not only shows temperature and relative humidity criteria but maximum condensation temperature, elevation from sea level, dynamic temperature change and storage conditions are also considered as criteria.

previous
Which cooling method has ASHRAE 2016 version privileged?
next
Testing and Commissioning in Data Center Facilities